You shall not round off the side-growth of your heads nor harm the edges of your beard. (Leviticus 19:27)

The LITV translates it this way:

The literal commandment is that we should not round off the side-growth of our heads.

He has no stately form or majesty That we should look upon Him, Nor appearance that we should be attracted to Him. (Isaiah 53:2)

Messiah was a Jew in the midst of a Roman world.  He was in the world but not of the world... distinct in His appearance and behavior including obedience to the commandments.  It was His obedience to this commandment that contributed to His distinctness.

We know that Messiah was without sin (Hebrews 4:15) so we know Messiah fulfilled this commandment. How He specifically fulfilled it is not known from Scripture. 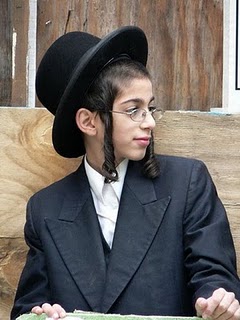 This commandment is observed in various ways by different Jewish sects. They allow the hair on their temples to grow developing what are called peyos (or peyot depending upon the dialect).

The Lithuanian Jews were less influenced by Kabbalistic practises, but still retain sidelocks to a degree, in a small number of variant styles:

We are able to fulfill this commandment today and should not shave the hair off the side-growth of our head.  What that means exactly is not clearly (or consistently) defined in Scripture.

Biblical scholars think that the regulations against shaving hair may be an attack on the practice of offering hair to the dead, which was performed in the belief that it would obtain protection in sheol; Nazirites shaved after contact with a corpse, captive women shaved after mourning the death of their parents, and the general prohibition in the Holiness Code is immediately followed by a rule against people cutting their own bodies for the benefit of the dead.2

A highly regarded source of Jewish understanding regarding the commandments, the Sefer HaChinnuch offers this insight:

At the root of the precept lies the purpose to remove far from us, take away from [the mind] between our eyes and from all our deeds and cast into oblivion, every matter of idol-worship and everything that is done for its sake.3

More in this category: « Do not perform acts of magic Men must not shave their beards with a razor »