Wear tefillin (phylacteries) on the head

"These words, which I am commanding you today, shall be on your heart. You shall teach them diligently to your sons and shall talk of them when you sit in your house and when you walk by the way and when you lie down and when you rise up. You shall bind them as a sign on your hand and they shall be as frontals on your forehead.
(Deuteronomy 6:6-8)

The literal commandment is that we should bind G-d's words as frontals on our foreheads.

This particular commandment pictures Messiah in a unique way.

The Word of G-d became flesh in the person of Messiah.

When we take G-d's words and bind them upon our flesh we are (at G-d's own command) imitating the incarnation. In the fulfillment of this commandment, we draw near to G-d in a special way. We express our desire to have His holy and righteous Law (Rom 7:12) bind our flesh and conform us to the image of Messiah (Rom 8:29).

The binding of the tefillin upon the head symbolizes our desire for all of our thoughts to be conformed to G-d's standards and to glorify Him.

How He fulfilled this commandment is not explicitly mentioned in Scripture, however, He likely followed the traditional manner of wrapping tefillin. Two facts lead us to this conclusion:

1) Archaeological discoveries at Qumran (the site of the Dead Sea Scrolls) uncovered ancient tefillin boxes that are dated 100-150 years before the first century. This indicates that tefillin existed prior to the first century and were a common part of Jewish religious observance at that time and ever since.

But they do all their deeds to be noticed by men; for they broaden their phylacteries and lengthen the tassels of their garments. (Matthew 23:5)

Note that Messiah does not condemn these men for wearing tefillin/phylacteries but for their hypocrisy while using them. They do not do this to honor and obey G-d. They do it to be seen by men. 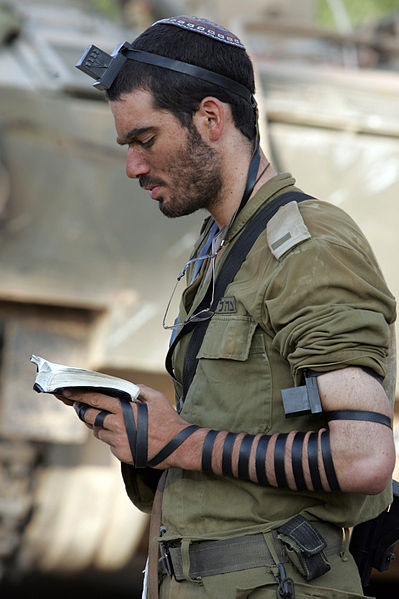 This commandment is traditionally observed in a literal fashion: taking the words of the commandments and wrapping them on the arm and the head.

The commandment to "bind them as a sign upon your arm and let them be tefillin between your eyes" is found in four places:

In the ancient form of dividing chapters and verses of Scripture, #3 and #4 were actually in different chapters and were considered two separate instances.1

The manner of the wrapping and knotting of the straps forms the Hebrew letters Shin, Dalet, Yod which spell the Hebrew word Shaddai which means "The Almighty".

We are able to fulfill this commandment today and should "let these words be as frontals on our foreheads".

1. The Mitzvah of Tefillin, Being Jewish, taken 10/01/2011 from http://www.beingjewish.com/mitzvos/tefillin.html [back]
Tagged with Signs and Symbols

More in this category: « The priests must bless the Israelite nation daily Bind tefillin on the arm »